On the line-a-day journal 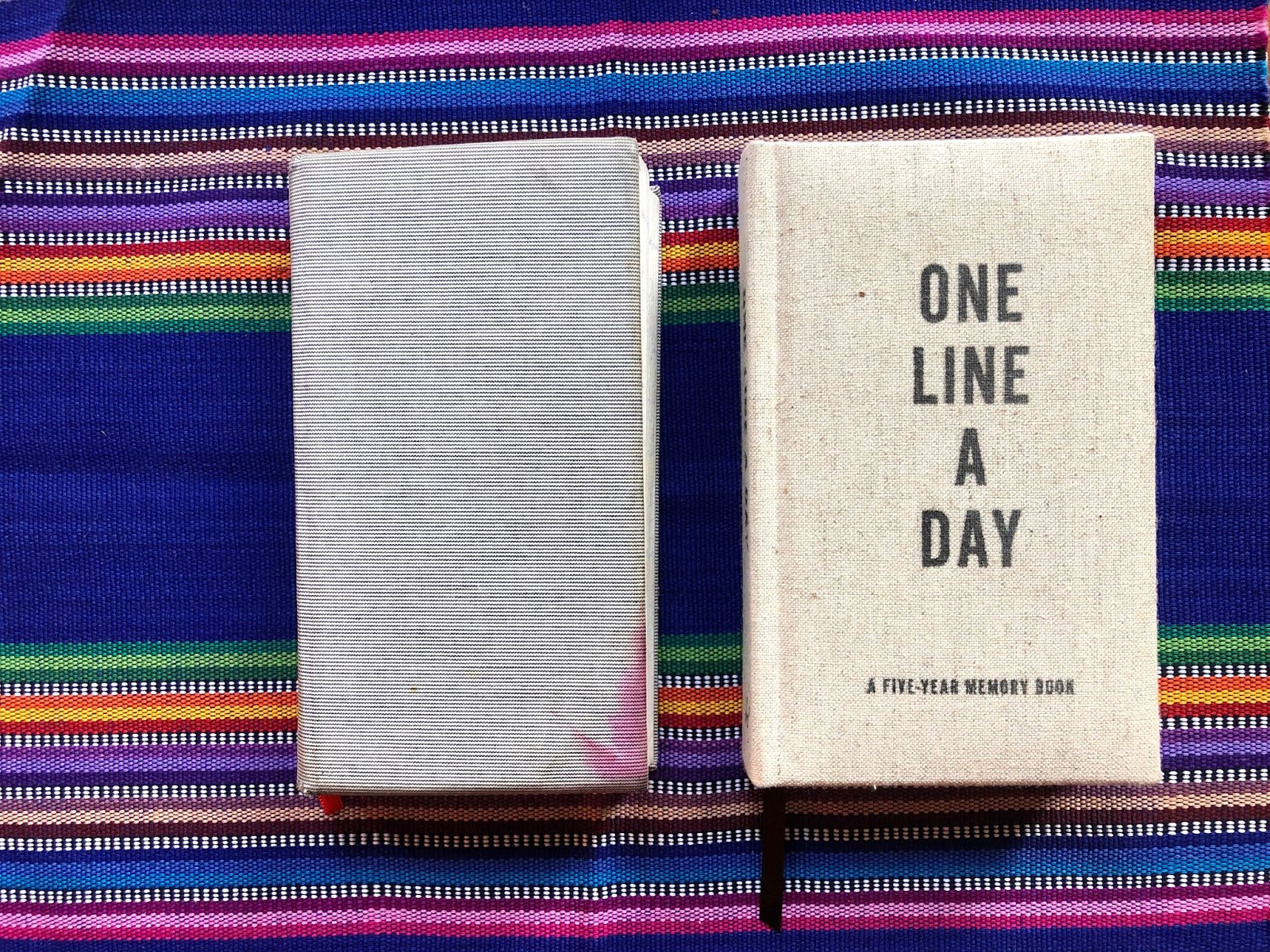 Sometimes I think it's the stuff you start on a whim and stick with that has the biggest impact on your life. For me those have included agreeing to go out with my boyfriend (turned into 11 years and counting), completing a 365-day creative project (made a daily card on January 1 and kept it up for 364 more days), and pursuing a career in the Middle East (wanted to start a new language in college and was intrigued by Arabic).

In October 2014, I came across this line-a-day journal (the battered one on the left) and thought it would be fun. Five years later, I've just recently finished my first journal (now onto the second!) and it has become one of my most treasured possessions. I wanted to share a few thoughts on documenting (almost) every day for five years along with some "secrets to success." Public journaling about my private journaling is about as navel-gazing as it gets so if you are reading this, thanks for indulging me.

The way mine is structured, you see everything you've written on that calendar date since you started the journal. So while I liked the daily journaling exercise for the first year, having years of entries to look back on made it so much richer as I kept going. It's honestly a bit overwhelming (though not in a bad way) to read through the old entries when I fill in a new one - so many memories are captured there. When I started in 2014, it was hard to imagine what life would be like in 2019. And now that I'm on the other side and working in a fresh new journal, it's crazy to think of all the life that will happen between now and 2024.

+ At the end of a day, it feels really important to make note of everything I did and accomplished, regardless of how monumental it actually is. It's as if I need to justify that it was a full and productive day. But two or three years later, I don't really care that I worked on a USAID budget and ate Chipotle - sometimes because that's just not very exciting and sometimes because I no longer remember the context that made those events meaningful. (Though sometimes boring stuff is more interesting later on than you'd expect.) I'm more interested in what I was thinking and feeling, even if it's just a random thought or insight. I try to remember that when I'm tempted to just write down the play-by-play of a day.

+ This is a journal for me, obviously, but for most of the last five years I've lived with my boyfriend and it is extra fun when I've jotted down a big milestone for him (like LSATs and Republican presidential primary debates) that I can share. There have definitely been times I've consulted the journal when we've been debating when some event went down!

+ Adapt as you go. I used to complete my entries before going to bed but lately have found that I'm too zonked - it's worked better for me to keep it on my desk and fill it out when I sit down to work, sometimes catching up on a few days at a time.

+ Something is better than nothing. In grad school, I fell out of the habit of filling in entries every day -- it felt overwhelming to sit down and summarize my whirling thoughts and full days into just a few lines, especially when there were problem sets to finish. I always reasoned I would go back when I had more energy - but I'm always surprised how quickly I forget the details of a day. Over the last few months I've made it my project to go back and fill in those entries, piecing things together based on photos and my planner. I'm moderately heartbroken that I can't remember more of my thoughts and feelings in addition to the events - but I'm glad to be noting down what I do remember before I forget more. And I'm glad that I never abandoned it even though I missed a bunch of entries.

+ I would have expected to draw a conclusion that every day matters - that whether the day was a fabulous wedding celebration or a humdrum workday, it still carries equal weight - just 24 hours.  The trend among scrapbookers is to capture everyday life, not just the Hallmark moments. But instead, I've found that some 24-hour periods "count" for more than others. Some days I could write pages and others I struggle to fill the six lines. And that's okay. Obviously it still matters tremendously to have a happy everyday life - but those exciting, top-of-the-world times make the daily grind worth it.

I've experimented with a couple other daily memory-keeping projects over the years. In 2015, I made a card every day as kind of a small-scale art journalling project. The daily cards weren't specifically intended to document my life, but looking back now they capture the year so evocatively. In 2016 and 2017, I did 1 Second Everyday and love the videos that resulted. (I ran out of steam on that project but would love to get back into it someday.) So the line-a-day journal has been my most consistent form of memory-keeping. I hope I keep it up for a long time - I can't imagine how cool it would be to have a whole shelf of these lined up at the end of my life.
Posted by AnnaMice at 10:00 AM